JACK PIERCE ARTICLE IN WE BELONG DEAD NO. 12 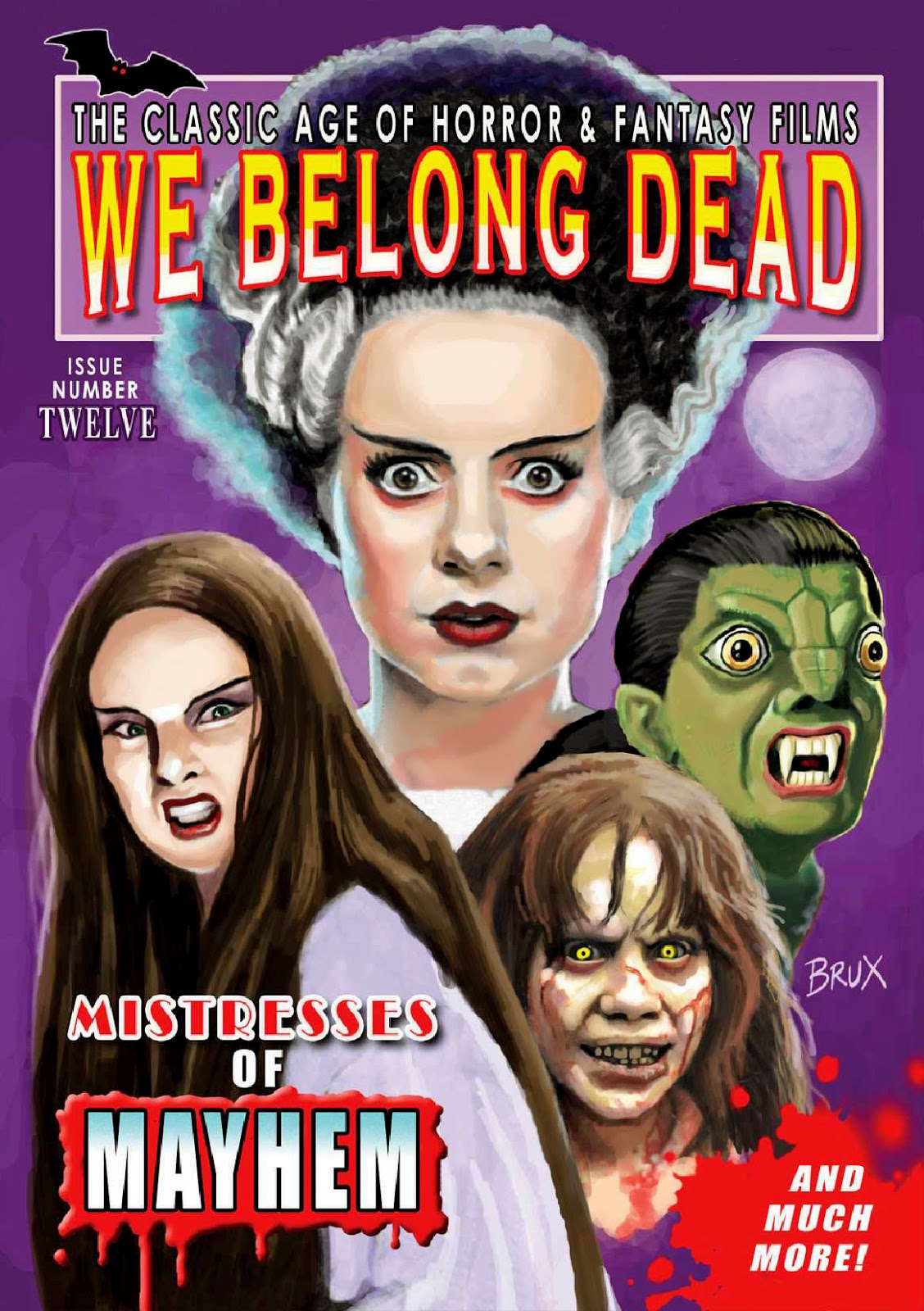 Among the contents found in the latest issue of the U.K.-produced magazine, WE BELONG DEAD (#12), is my article on Jack Pierce. Entitled, Jack P. Pierce: Making the World's Most Famous Monsters, I cover the life and career of Pierce and summarize his accomplishments.

Editor Eric McNaughton's magazine has been recently revived after an earlier incarnation of some years ago. It is very well done and I encourage anyone interested in all aspects of classic monster movies to give it a try. Ordering information can be found HERE. 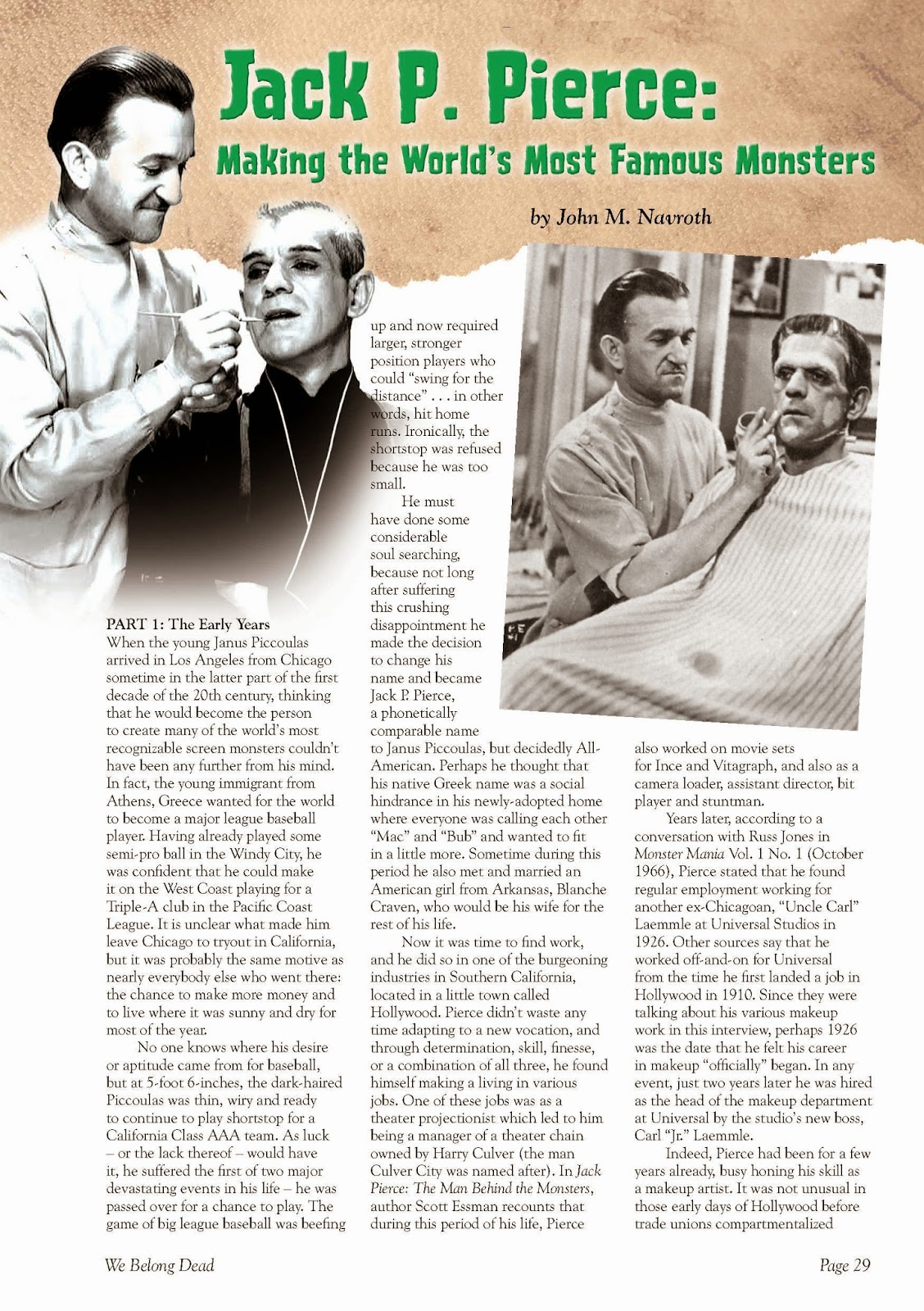 Email ThisBlogThis!Share to TwitterShare to FacebookShare to Pinterest
Labels: WE BELONG DEAD 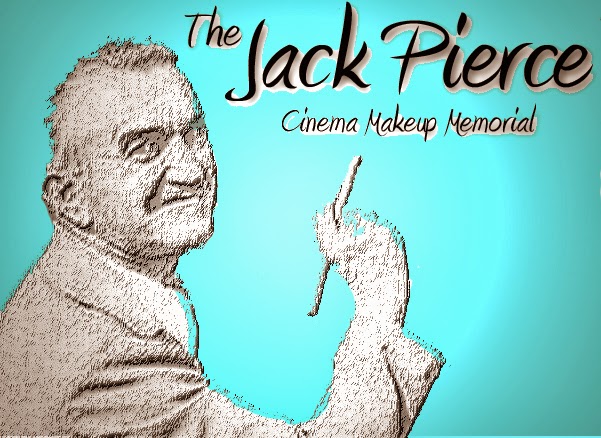 This site is dedicated to the life and work of Jack P. Pierce, genius of cinema character makeup. As the head of Universal Studios makeup department from 1928 to 1947, Pierce created many of the most iconic screen monsters in motion picture history. During his career, Pierce designed and “brought to life” such unforgettable characters as Dracula, Frankenstein’s Monster, The Mummy, The Wolf Man and a host of other monstrous screen villains. Subsequent interpretations of these movie monsters were filmed in later years by other studios, but it was the original versions by Pierce that remain most indelible in cinema history and popular culture. Not surprisingly, his creations have served as inspiration for generations of makeup artists and his influence on the industry – even today – cannot be underestimated.

Pierce was the ultimate artist and craftsman, and spent many long hours developing just the right materials and techniques that made his monsters seem real. Called “practical makeup” these days, Pierce utilized everything from cotton, to collodion, to Yak hair in order to achieve his uncannily realistic effects. While foam latex and pre-cast facial appliances began to be used more frequently to save time and money, Pierce preferred instead to make his monsters “from scratch”.

It is the purpose of this site to promote Jack Pierce’s accomplishments in the motion picture industry and to help ensure that his legacy lives on. Through study, research, and networking with fellow enthusiasts, it is intended that the information presented here serve to further Jack Pierce’s deserved and rightful standing in cinematic history.

We welcome your comments, as well as any information you would like to share about the life and work of Jack Pierce. You can comment on this post or use the "Contact Us" form on the sidebar to your left. Thanks, and we hope you enjoy our page!
Posted by John at 10:21 AM No comments: