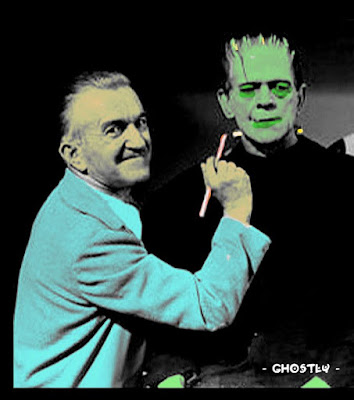 Email ThisBlogThis!Share to TwitterShare to FacebookShare to Pinterest
Labels: IN MEMORIAM 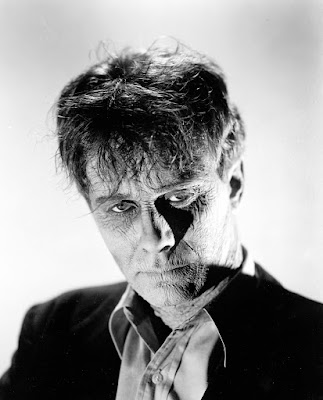 An ancient Mayan "nerve gas" is used on a modern subject as an experiment for George Zucco's Dr. Alfred Morris in Universal's THE MAD GHOUL (Working title: THE MYSTERY OF THE MAD GHOUL). Released on November 12, 1943, it is one of the "forgotten" film of the 40s, and despite a few atmospheric scenes, not one of Universal's best.

The B-star cast of Zucco, Turhan Bey, Evelyn Ankers, David Bruce, Robert Armstrong and Milburn Stone, and a recycled if not rousing music score by Hans J. Salter does little to raise the fare to tepid. David Bruce plays Ted Allison and is the subject of Dr. Morris' mad plan.

Jack Pierce was on hand for the makeup chores, but this is one of the numerous films that he goes uncredited. Pierce did a little recycling himself, as he reworked his ancient, wrinkled skin technique used over a dozen years previous in THE MUMMY for Bruce's "ghoul" makeup. The combination of cotton, collodion and (probably) green greasepaint was effective enough to make the character creepy enough to scare wartime theater-goers.
Posted by John at 1:00 PM No comments: