"The Universal Weekly" was "U's" promotional magazine. In the 9 February 1935 issue was a 2-page spread featuring BRIDE OF FRANKENSTEIN, which would be released the following May.

Much praise was given to director James Whale, stating that his productions were, "perfect from every angle, story, cast, settings." It is also interesting to note that the studio avoided using the term "horror" or "thriller" to describe the film, instead calling it a "strange compelling drama".

Shown at the top is a very serious Jack Pierce pictured working on Boris Karloff's headpiece. The caption erroneously mentions that the look is similar to "last year's monster makeup." 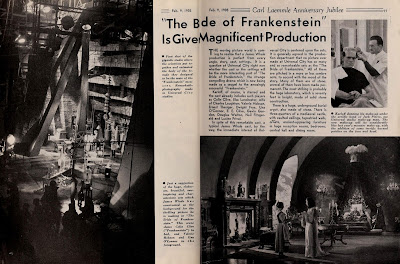