JACK PIERCE'S BEAUTY AND THE BEAST 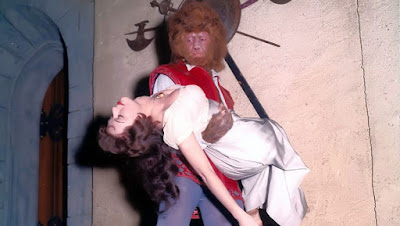 Released on 8 December 1962 by United Artists, this is a lesser-known version of the classic tale. Jake Pierce supplied the "Beast" makeup between his work on "The Devil's Hand" and "Creation of the Humanoids".

Owing somewhat to the design for Pierce's Teenage Monster in the 1958 film of the same title, he fashioned a wig and facial appliances for actor Mark Damon, who ended up looking like a poor-man's Larry Talbot.

The Robert E. Kent production was directed by Edward L. Cahn, who had previously directed B-movie classics such as "Invasion of the Saucermen", "It, The Terror From Beyond Space", and "The Four Skulls of Jonathan Drake". It would be his last film. Cahn passed away the next year on 25 August.

Email ThisBlogThis!Share to TwitterShare to FacebookShare to Pinterest
Labels: BEAUTY AND THE BEAST, EDWARD L. CAHN