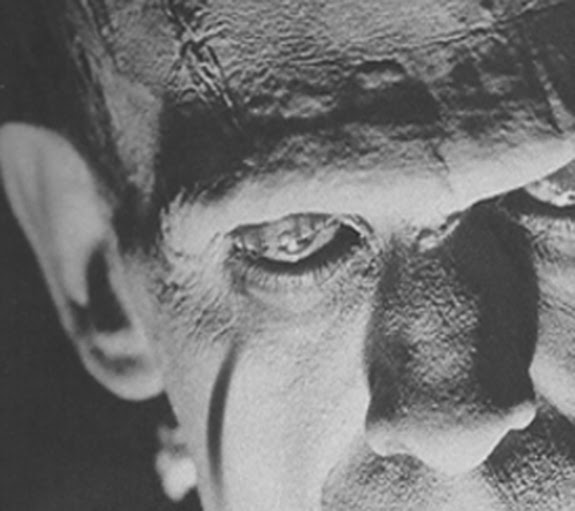 JOHN NAVROTH
When I found out as a Monster Kid during the 1960’s TV revival of the classic horror films that the person behind the making of my favorite monsters was a man named Jack Pierce, I was an instant fan. Pierce was the genius behind the makeup creations of every single Universal monster from the 1930’s to the early 1940’s. While he would have humbly deferred their success to the actors under his makeup like Boris Karloff, Bela Lugosi, and Lon Chaney, Jr., it was Pierce who gave them form and substance. Unfortunately, for all his accomplishments over the years, he faded into obscurity and his passing went largely unnoticed. Only about two dozen people attended Jack Pierce’s funeral in the summer of 1968.

As for myself, I was born in sunny Southern California (not many miles as the bat flies to famed “Horrorwood, CA”) and went to Junior High and High School in the San Fernando Valley. I travelled some, sold office machines, then worked for a while in the animation industry with gigs at Ralph Bakshi (The Lord of the Rings) and Hanna-Barbara (Superfriends, Scooby Doo). For the last 25 years, I’ve lived in the Pacific Northwest, not far from the city of Seattle on the eastward side of Lake Washington. While not engaged as a public employee in the field of occupational health and safety, I like playing music and getting out into nature with my trusty Nikon.

I also write. While a member of the H.P. Lovecraft Amateur Press Association I had an essay published in S.T. Joshi’s The Lovecraft Annual. I’ve also contributed to Fate, Famous Monsters of Filmland, Monsters from the Vault, G-Fan and scads of small press magazines.

A few years ago I started a blog called Monster Magazine World. I found myself referring to Jack Pierce and his accomplishments in many of my posts. It didn’t take long for me to realize that Jack’s artistic genius is at the core of the classic Universal monsters and his contributions are indivisible from their deserved legendary reputation. I also realized that, while there was no shortage of photos depicting Jack with his makeup creations, there wasn’t a lot of his biographical information readily available. Many websites and bios recycle and rehash the same information, some of it erroneous.

It is the purpose of this site, along with my co-blogger and co-author, Douglas Brown, to share information and news regarding our on-going projects regarding Jack Pierce, the Man Who Made Monsters Famous!

DOUGLAS BROWN
Although I did not hear the term "Monster Kid" until a couple of years ago, I have lived many of the typical monster kid experiences.  Born in the mid-fifties, I grew up watching monster and science-fiction movies on TV shows like Jeepers Creepers and Strange Tales.  When a neighbor showed me a well-read copy of FAMOUS MONSTERS #28, I was hooked!  Thanks to Forry Ackerman's wonderful magazine, I learned about the magic of movie makeup and the process of turning men into monsters.  Since my favorites were Wolf-Man, The Mummy, and Frankenstein's monster, I was fascinated by photos of a man in a doctor's smock applying Fuller's earth, yak hair, putty, and gauze to the faces and bodies of Karloff, Chaney, Lugosi, and the other great horror actors.  That man was Jack Pierce, of course, and I wanted to learn more about this man and his incredible work.

As life progressed, my attention turned to other interests and monsters faded somewhat from my attention.  Several years ago, a series of events re-kindled the monster kid embers that lay dormant in my brain.  As I tried to re-learn the history of monster movies, I was disappointed to discover the dearth of information about Jack Pierce.  John Navroth and I talked about the injustice of the inattention paid to this master of makeup.  This blog is our attempt to provide a clearinghouse for information about Jack Pierce; a place where his fans can share thoughts, memories, and data about this giant of the motion picture industry.  I hope you will join in the discussion!


NOTE: To get in touch with us, use the contact form on the home page. We'd love to hear your thoughts about our efforts. Plus, if you've got anything to share about Jack Pierce, from personal experience, to newspaper clippings, photos, or just about anything, please let us know.